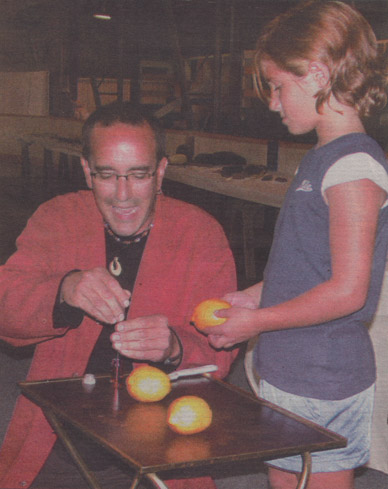 Using three lemons and some red dye made of boiled cabbage, science guru Pierre Harrison shows Rachel Bondi how to fool the audience in a variation of three-lemon Monte.
by Erskine

simple red cabbage, boiled for a few minutes to release its colour into the water, to determine the acid or base properties of a liquid.              "Science is really just observation," he said.  "We can have a lot of fun observing science using simple stuff like toilet paper rolls, string, a plastic cup of water, all safe things you can find right at home."                            Mr. Harrison made his original Island debut at the Great Manitou Star Party, and Dark Skies Association President Rob Maguire brought the idea of bringing Mr. Harrison in as educational entertainment at the fair.  "This is a really nice-sized crowd," noted Mr. Harrison, who has delivered his workshop to crowds of 700 or more.  "With this size you can really work with the kids, get them in